The Social Distance between Me and You

Due to the COVID19 pandemic 1.8 billion Muslims, or 24 percent of the world’s population, observed Ramzan like never before. In India, under the nation-wide lockdown there were no evening gatherings and prayers offered at mosques. For some food was more difficult to access than others. By asking 12 year old Rehan from Ahmedabad to photograph his daily meals, I started analysing food inequality for myself.

Last year, as a part of my Master’s research, I worked closely with a group of children who live near the Pirana dumpsite in Ahmedabad. This 1km² area is commonly known as the Bombay Hotel. On Google Maps it is demarcated as Chippakuva, a name that’s unfamiliar to its residents.

The area is enclosed by an 85-acre landfill on one side and a major highway on the other. Every now and then, journalists report on the landfill but their interest is limited to incidents of fires and deaths. We were using participatory media practices to document inequalities that they face in their daily lives.

Bombay Hotel is a predominantly Muslim locality, where an estimated 25,000 households are deemed ‘illegal’ by municipal authorities. Residents don’t have access to a single hospital or secondary school. Having been denied educational opportunities, their livelihoods depend on the informal sector.

Despite having voter identification and ration cards, they are in conflict with the state over issues of land, drinkable water, and clean air. It is therefore not surprising that after more than 2 months of a nation-wide lockdown, government aid has not reached citizens living in this public and political blindspot.

Toxic fumes from mountains of burning garbage at Ahmedabad’s Pirana landfill and the nearby residential area. Photographed by Suraj Katra.

Due to travel restrictions, I’ve been working with one of the children, Rehan, remotely on a video blogging exercise. The major concern in each of his recorded updates is shortage of food. I asked him to photograph his daily meals to visualize how he was eating during the lockdown. A few days in, I noticed he was eating the same food for lunch and dinner. Some meals consisted of not much more than rice.

The holy month of Ramzan was approaching. Nutritious foods like fruits and dates, which are an important part of iftar (a meal that breaks the day-long fast), were more expensive during the lockdown. Ramzan generally involves increased spending, which Rehan wasn’t sure his family could afford this year. Knowing how important this time of year is, I transferred some money to them.

Rehan and I have a strong professional bond. Our relationship is unlike that of a teacher and student, but rather that of collaborators. I decided the right approach would be a mutual exchange and spoke to him about the purpose of this activity. The pictures were not meant to be a comparison between two individuals, but a larger commentary on social disparity.

Acknowledging my intent, he said “I will not feel bad. You don’t need to worry. I understand this is our work.” During one of our regular conversations, I asked if he noticed any differences in our photos. Without addressing me personally he responded, “It’s ok if people want to be healthy and try new things using fancy ingredients. That’s not the reality for most people during this time. We don’t take pictures of our food for Instagram because we don’t have much to eat.” 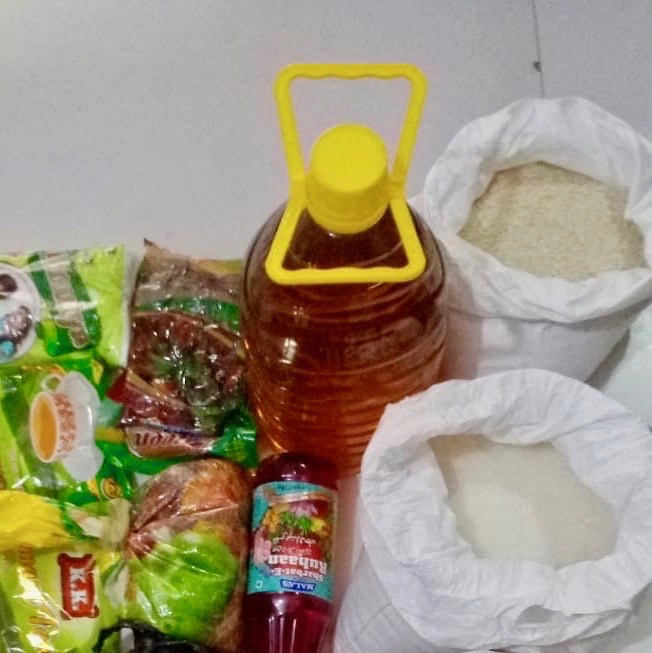 While speaking to a photographer friend, he asked if I might start feeling guilty about my own consumption through the process. Being a student of Social Sciences, I’m trained not to look away from the contradictions of inequality. As privileged people trying to make sense of disruptions to our lives, my friends and I were cooking and baking more than usual.

At the same time, fundraising and relief efforts flooded my social media feed. I felt uncomfortable looking at images of people posing with ration kits, half-smiling but visibly distressed. NGOs are required to provide donors with detailed reports of ‘beneficiaries’, as they are called in management terms, who feature in their impact reports. This idea for documentation came from the rift in dignity afforded to those who upload photographs of elaborate meals and those who are photographed receiving handouts.

Nikita’s groceries ordered online and delivered to the door.

Rehan’s mother at a crowded market

Rehan’s house is the size of my bedroom. Describing what being at home with his parents and 5 siblings has been like, he said “It’s been long since we spent so much time sitting, talking and watching movies together. I like playing with my siblings and helping them study. I’m also discussing future plans with my parents. So, we understand each other better. But it’s been difficult for the small children who, unlike adults, cannot go hungry. As an older brother, this makes me really sad. I wish there was something I could do to help but I’m too young to work.”

His concern for his family translates into a sense of dutifulness towards our country. “The situation I’m talking about is not restricted to my home. It applies to my entire community. There must be so many people in so many states who are facing these problems. Wherever you stay, please make sure that the people around you are not going to sleep hungry.”

Fruit cart at the market near Rehan’s house

The flaws in India’s Public Distribution System have been accentuated exponentially by the global pandemic. A study published by eminent economists, Jean Drèze, Reetika Khera and Meghana Mungikar, found that 100 million people were excluded from receiving rations because coverage under the National Food Security Act relies on census data collected in 2011. This staggering number does not include those who do not have ration cards. Civil society has had to come to the rescue of poor citizens.

According to the Center for Monitoring Indian Economy, 122 million Indians lost their jobs in April alone. That same month, the central government approved the conversion of ‘surplus’ rice into ethanol to be used in hand sanitizers and blended in petrol. Destroying food crops at a time when hundreds of millions are unemployed and many are starving is obscene.

Discussions about food insecurity need to move from the domain of personal troubles to a public issue. However, policy failures also need to be humanized. An individual’s experience of hunger or pain of not being able to feed their child, is a part of the statistics on malnutrition. Stories can be catalysts that challenge people to think structurally and institutionally. The difficulties Rehan is facing speak of the state’s failure to care for a young child so full of potential and genuine concern for his fellow citizens.

By sharing this personal exchange, I seek to create a dialogue about our relationship with food and each other. In a plea to humanity, Rehan reminds us “Ramzan is a time to spread love, peace, and kindness. It is a happy festival in which we should not fight and remain calm through worship. We need to help one another while following social distancing in these difficult times. We may not be able to give fruits but we can share whatever we have. If even one person goes hungry and the rest eat, that’s haram (forbidden or a sin) for us.” The spirit of service and interconnectedness is alive.

Rehan and his friends can barely make ends meet because of the pandemic, they are struggling to pay fees for continuing their education, let us all try to help as much as we can by donating to them to make sure they can finish their education!

'David Attenborough: A Life on Our Planet' : Better Late Than Never (?) - A Review

280 character Tweets vs Credibility of the judiciary

The Democratization of Justice